Don’t knock it ‘til you try it: Colombian hot chocolate with cheese

When chef Juan Berbeo couldn’t find Colombian cheese to put in his hot chocolate and add to his arepas at his Melbourne restaurant, he turned to Australian dairy. The result, he says, is better than what he grew up on in Colombia.

There’s a saying in Colombia: “chocolate sin queso es como amor sin beso”, chocolate without cheese is like love without a kiss.

Colombians grew up adding chunks of cheese to the bottom of their hot chocolate mugs, assuming the rest of the world did the same. Also known as chocolate santafereño and chocolate completo when served with bread for dipping, it’s made with bars of dark chocolate flavoured with cinnamon and clove.

Traditionally, one breaks off the bars and adds them to a bulbous jug called a chocolatera, along with milk and water. The mixture is whisked with a molinillo in a gesture similar to rubbing your hands together, before letting it boil three times.

“Every mother in Colombia will tell you that you have to let it boil three times or you get sick,” says Juan Berbeo. 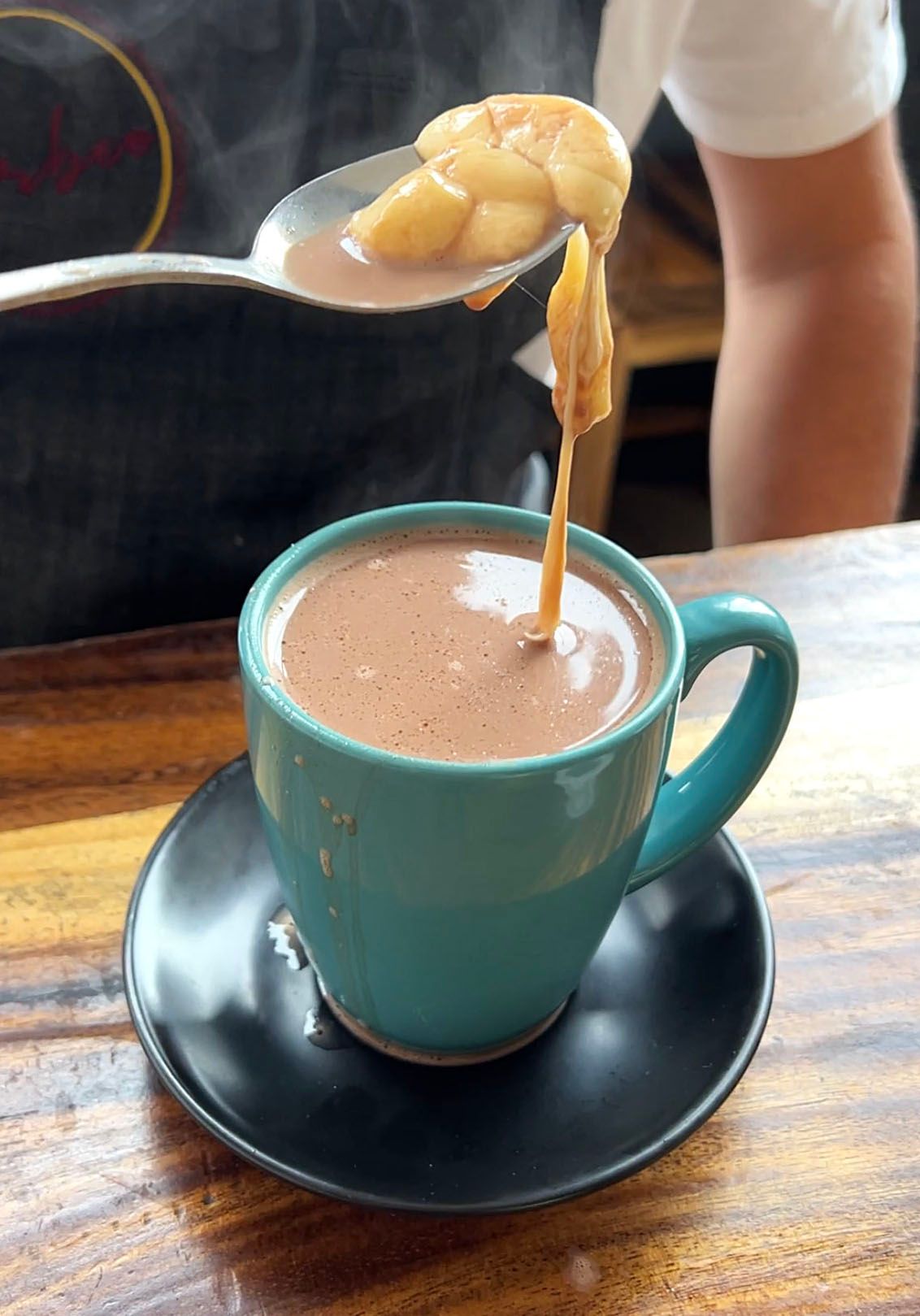 Juan co-owns Berbeo Bros in South Melbourne with his brother, Sebastian. The pair grew up in a Fusagasugá in Colombia in a multi-generational restaurant, farming and butchering family. When they opened their Colombian concept in 2019, they couldn’t find anything similar to the cheese they’re used to at home.

Usually queso campesino or queso doble crema are used in hot chocolate, sometimes queso Oaxaca from Mexico. In Colombia there are unique high-altitude ecosystems called paramo, where farmers make queso fresco (fresh cheese) in the mountains. According to Juan, some still ride some eight hours on horseback to meet distributors, who sell it for them at city markets. In Australia, the closest thing we have is mozzarella. But it’s not close enough.

“We wanted a cheese similar to the one in Colombia, so we came up with the recipe and spoke to That’s Amore who now make it for us,” says Juan. Berbeo Bros now sells their Colombian-style queso doble crema, made in Melbourne using Australian milk, via their online store. Other South American restaurants around the country have caught on and a one-kilogram log is currently in development to meet wholesale demand.

“I think our version is better because in Colombia, they add oil to make it more affordable and to get more fat content, whereas the quality from the one here it’s amazing,” says Juan. “I just spent two months in Colombia – it’s no comparison to what we have here.” Colombian cheese is an essential ingredient on the Berbeo Bros menu. Both in the Motherland and South Melbourne, South Americans snack on queso con bocadillo, a traditional dessert with firm guava paste layered with fresh cheese.

Queso doble crema fills the empanadas and makes up 50 per cent of an extra cheesy arepa. The mazorcada is a crisp plantain fritter blanketed in creamy corn and cheese and garnished with cocktail sauce and quail eggs, or there’s a simpler version with deep-fried chunks of rope plantain topped with guava paste, cheese and finished under the grill.

“In Colombia we eat cheese everyday. We have it in hot chocolate, for breakfast, for afternoon tea,” says Juan. Sugar and salt have always complemented each other in food combinations around the world. Think salted caramel, pancakes with maple syrup and bacon, cheesy Middle Eastern knafeh with sugar syrup, champorado (Filipino chocolate rice porridge with tuyo, salted and dried fish) and fresh fruit dipped in chilli salt in Mexico and Vietnam to name a few. When it comes to Colombian hot chocolate and cheese, it’s simply a matter of don’t knock it ‘til you try it.